You are here: Home / Blog

July 2018 ETA: Folks, I am closing comments on this post. I know it’s been valuable to a lot of people and I appreciated the discussions, but Dinah died this past May unexpectedly (her calcium had been fine, my vet thinks it’s a fluke thing). I am devastated and traumatized by the loss and I don’t want to talk about her or hypercalcemia anymore. I’m a writer. This is my writer site. This is not a pet forum. I am leaving the post and comments in case people find it valuable/helpful, but I encourage you to find other resources to talk about this because I just can’t bear it anymore. She was my heart and now she’s gone.

Thank you for understanding.

*Note: Originally posted at my old blog. This is a repost.*

Last May you may recall I ran into some issues with my beloved feline Miss Dinah Fantastico. I wanted to blog a bit about what went on, what worked for us, and what I think others should keep in mind, as this was something I wasn’t familiar with prior to her little episode.

Miss Dinah was a stray I ended up with in September 2010. She lived under a dumpster at the local grocery store, starving, for several weeks before I got her. I’d been wanting to get another cat (I only had two at that point, shut up), and Mum remembered her there, so coaxed her into her Jeep and brought her over.

It was love at first sight.

Aside from the usual worms and fleas, she was quite healthy and the vet put her age at around 2-3. She was spayed, had her needles, and bloodwork came back normal. She’s always been a very…hungry cat, which I find is common with strays. Her weight was nearly 12lbs and the vet and I had an understanding that we didn’t want her to go over that, so I watched everyone’s intake of food.

Earlier this year…she lost some weight.

I did notice but not to the degree that she’d lost it–seeing her every day, it was hard to tell. But my mother, who drops in maybe once a month, definitely noticed. So I started paying better attention. Instead of being the first to the bowls to eat, she’d sit on the bed and watch the others. I noticed her still drinking, but with as many pets as I have, it’s sometimes hard to judge who is drinking the most as there are bowls of water in multiple rooms that I refill throughout the day.

She was also stressed; despite it being a year since the addition of number six, she still hated him and was always in a bitchy mood. I’d passed off some of it as stress but ended up taking her in for my dog’s six month checkup.

Miss Dinah was down to 9lbs. It was a GOOD weight for her, but not a NORMAL one. So we did blood tests.

She came back as hypercalcemic. This basically means she had too much calcium. Too much or too little of anything is not good.

This can be a symptom of a lot of…very bad things. Several types of cancer, thyroid (though we’d checked that and it was fine), renal failure (so far her kidneys were fine, though), etc. It could also be idiopathic, meaning a cause unknown.

I have no medical background whatsoever, however if you give me a name for something my pet has, I will become a walking talking encyclopedia on the subject. Dr. L had a few more tests she wanted to run. Thus far Dinah wasn’t showing symptoms of cancer but that didn’t stop me from learning about All The Cancers, treatments and prognoses, and scaring the fuck out of myself.

Nothing was turning up in her other bloodwork, however. So we got looking at idiopathic hypercalcemia.

I did a hell of a lot of research and it turns out that, while it’s labeled “idiopathic”, there are plenty of theories behind what causes it. Among them, acidifiers in the cat’s diet.

My layman explanation: what it comes down to is that a cat’s natural diet, which would be high in protein, produces slightly more acidic urine. Commercial cat foods are high carb and produce more alkaline urine, which is perfect for urinary crystals to form (this was prevalent a few decades ago–my mum went through an awful time with her male cats in particular). Acidifiers were then added to commercial pet food to prevent urinary stones (you know…instead of just increasing the protein and feeding them a natural diet); those problems decreased the rate of urinary crystals however instances of hypercalcemia increased.

In cats with a genetic predisposition, it’s theorized that these acidifiers lead to hypercalcemia. Left untreated, this eventually leads to kidney failure and a host of other problems.

When it seemed more and more likely that the culprit in Dinah’s case was idiopathic hypercalcemia, I printed out half a dozen articles and case studies on nutritional management and brought them to my vet. Although there are various drugs we could try, they all have side effects, and I wanted to attempt this first.

I love my vet because she not only gave her okay, she photocopied everything I printed out for her records.

I started by getting Miss Dinah completely off of dry food. I buy extremely high quality food for all of my pets (NOT the shit in the grocery store, dear god, keep away from that crap), however acidifiers were present in nearly all of the foods, primarily dL-methionine. So no dry food for her at all.

From there I gave her only Wellness brand grain free canned cat food (chicken or turkey), as I’ve been EXTREMELY happy with my dog on Wellness. I can’t get raw food in my area and I…I just could not handle the thought of making my own. I read extensively about but I’m a vegan and I can’t fathom having a meat grinder and preparing dead animals for my cat to eat. I just can’t.

I spoke to my local pet food store clerks and they recommended The Honest Kitchen, which is a dehydrated food. It’s not just high quality; it’s certified human grade. I started working that into Dinah’s diet (with some tuna).

We did some bloodwork after she’d been on canned food only for a few weeks and Dr. L said to keep going as her calcium was down a tiny bit. We finally went back in a week and a half ago for a follow-up. Dinah’s weight was at 10.5lbs (and we’re going to try to keep her there), she was no longer drinking excessively, and she’s had a normal appetite. It looked good, but what about the bloodwork?

It came back totally normal.

Her calcium is fine. Her kidneys are fine. So far, nutritional management seems to be working.

So what’s my point in blogging besides to update those following along at home? I get a fair number of website hits regarding previous pet posts and I know a lot of animal lovers follow me.

Learn to read labels. Learn to look for red flags in the ingredients list. Learn the difference between carb-filled, POS grocery store food and food that is species-appropriate. Learn about things like acidifiers that can cause problems in some cats in case nutritional management can solve a problem instead of drugs. Do your own research. 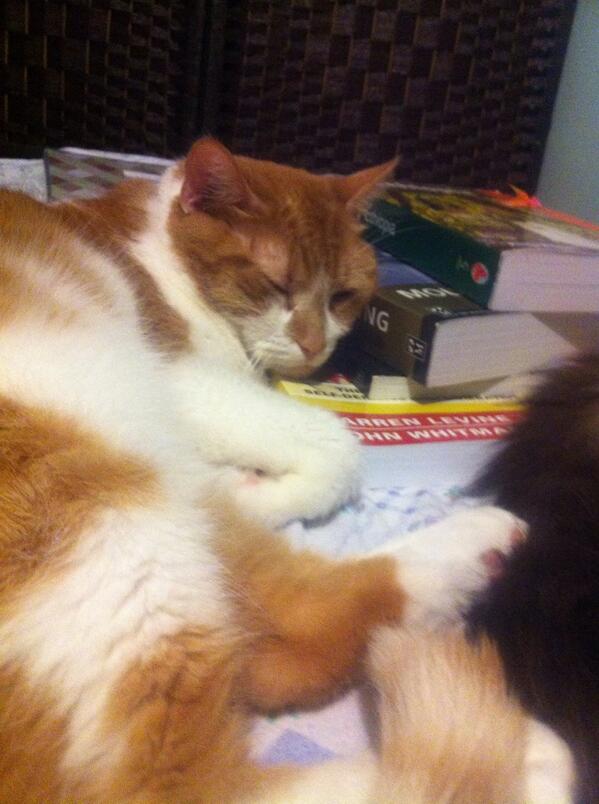 So many health problems come back to pet food. I fed my furbrats crap for years because I didn’t know any different–it took a major shakeup with Sophie’s health for me to try something new. Since she’s been on Wellness, her liver values stabilized, her coat and skin irritations improved, and her energy is higher. I get stopped by people on the street who ask me if she’s just came from the groomer because she looks so good now.

It costs a little more money but I’d rather spend that cash on better food and fewer vet visits.

Many cats with idiopathic hypercalcemia are asymptomatic until it gets serious–it’s often only found during bloodwork for dental work or other surgery. If they do show symptoms, it tends to be loss of appetite, lethargy, increased thirst, and mild weight loss–again, it’s very hard to tell until it’s too late.

If you’re able to do routine bloodwork once a year, try to do this for your pets. If you can’t, monitor food, water, litter box usage, weight, and general behavior as well as you can for any changes and don’t hesitate to have a vet follow up if anything changes. If I’d left Miss Dinah, the hypercalcemia would’ve worsened and she’d eventually go into renal failure.

We’ll go back and check again in six months to ensure things are stable but for today…I am quite happy.

*Note: I am not paid or sponsored to recommend ANY of these foods. This is merely what I tried and found worked. YMMV, etc.

**Also note: I AM NOT A DOCTOR OF MEDICINE, HUMAN OR ANIMAL. None of the above is a substitute for proper medical advice; it’s to encourage you to take your cat in to see a professional if you haven’t and to point out some important links if your feline has been diagnosed with IHC.

In Memory of Gus

Join me on Patreon for $1/month and support new books being written.

Chat with Other Readers

What I’m Working On

Places to Spend Your Pennies

My characters kill people so I don’t have to.